What is Diesel Engine Runaway? 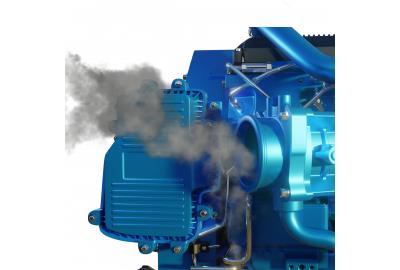 What is Diesel Engine Runaway?

If you work in or near hazardous areas, like those found in the Oil & Gas industry, you are exposed to dangers and risks every day. In fact, according to the Occupational Health and Safety Administration, in the United States alone, 489 oil and gas extraction workers were killed on the job between 2013 and 2017 (source: https://www.osha.gov/SLTC/oilgaswelldrilling/). One of the lesser-known, but deadly, risks is the dangerous phenomenon called diesel engine runaway. This video from AMOT’s Ask the Expert series explains how engine runaway can happen.

To understand runaway, you must first understand how a diesel engine operates and how it differs from a gasoline engine. In a gasoline engine, the fuel and air mixture within the cylinders is ignited by spark plugs. In a diesel engine, however, combustion occurs in a completely different manner. A diesel engine draws in clean air through its intake into a combustion chamber. In the chamber, the air and fuel mixture is compressed so much that it creates extreme heat and ignites.

A governor regulates the fuel fed into the combustion chamber and directly controls the speed of the engine. The more fuel the governor allows in, the faster the engine will go. The only way to shut down a diesel engine is by removing the fuel supply or cutting off the air supply.

How Does the Engine Runaway?

Diesel engine runaway occurs when a diesel engine ingests a hydrocarbon vapor, or flammable vapor, through the air intake system and uses it as an external fuel source. As the engine begins to run off these vapors, the governor will release less diesel fuel until, eventually, the vapors become its only fuel source.

If not stopped immediately, it can cause the engine to overspeed, the valves to bounce, and flames can pass through the manifold. These flames can ignite the flammable vapors present and cause catastrophic accidents and injuries. One well-known example of this type of accident is the Deepwater Horizon explosion that happened in the Gulf of Mexico on April 20, 2010.

How Quickly Can It Happen?

Within 3-12 seconds of even low concentration levels of gas being sucked into the engine intake, runaway can begin, leaving little time to react. When an engine begins to runaway, a person’s first reaction is to turn the key off and kill the engine. Unfortunately, this will not solve the problem because the engine is now running off the flammable vapors entering through the intake. The engine will continue to run uncontrollably and the only viable option at this point is to cut off the air supply.

Fortunately, diesel engine runaway is preventable. Devices can be installed on an engine’s air intake hose that sense overspeed and close off the air supply to shut down a diesel engine in a safe, rapid fashion.

Learn how to prevent diesel engine runaway in our related post below.